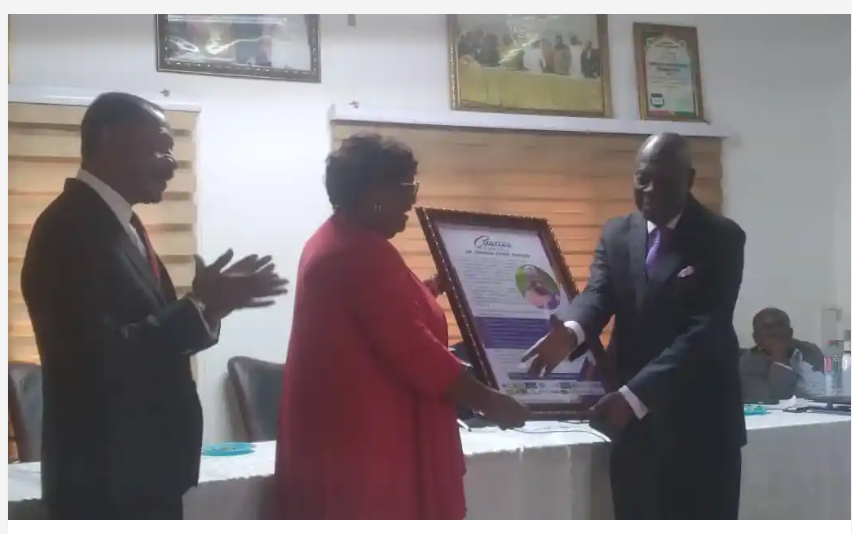 Dr Yamson, then the president of AGI, together with his colleagues from GNCCI, GEA, FAGE, and GAB, established the Private Enterprise Foundation (now Federation) with the main objective to influence national policy initiatives to create an enabling environment for private sector businesses to thrive.

Through his leadership, the Federation was inaugurated on 25th January 1995 with USAID offering to sponsor its operations for the first five years. USAID supported PEF’s operations for more than ten years, making it possible for PEF to exert its influence in policy formulation and capacity building for the enabling environment for its members.

Dr Yamson was a PEF President for 10 plus years and was instrumental in securing the landed property for the Federation. Considering his impact in manufacturing, telecoms, banking, finance, education, health, extractives and the domestic private sector, we think it would be prudent to celebrate this beautiful milestone with him.

He single-handedly donated a 1.08 acres land to PEF. This landed property is located at Ridge West, Accra which is no mean a prime location, and has therefore become a great asset to the Federation. The land has virtually become the single most priceless valuable which PEF has leveraged on to generate some funding to support its operations and we owe it all to Dr. Ishmael Yamsom.

Dr. Yamson, comes across as a genre who has always been a shining example wherever he has worked and the seed he sows always grow to become a flamboyant tree whose branches become formidable nest for all and sundry, and celebrating him in a modest way such as this is not only a beaconing example to the younger generation but a demonstration patriotic citizen that nations struggle to find and we consider it a worthwhile to show our modest appreciation to this gentleman.

So, on the occasion of his retirement, PEF would like to join all and sundry to say a big thank you to Dr. Ishmael Yamson to wish him well and pray the Good Lord to grant him a peaceful retirement.

A cross-section of dignitaries at the launch

The Private Enterprise Federation (PEF) with support from the Open Society Initiative for West Africa (OSIWA), has carried out an in-depth research over the last 24 months to gather evidence on Ghana’s tax regime including findings and policy proposals for reform. On Wednesday 14th October, 2020, the report was launched to sensitize stakeholders on the findings and also announce the next stage of the project, which will be full scale evidence-based advocacy.

The research revealed that the country’s one size fits all approach to taxation of MSMEs was hostile to business growth and inhibits the ease of doing business in the country.

Presenting the report to the media, the Chief Executive Officer of the Federation, Nana Osei Bonsu, said a tiered tax system, which reduces the tax burden on businesses especially MSMEs, would encourage voluntary compliance and reduce the cost of tax administration in the country.

He noted that although the MSME sector formed about 92 per cent of the total registered companies in the country, they contributed only about four per cent to the total domestic revenue. He continued that was due to what he described as the one size fits all approach to taxation being implemented in the country, which made it difficult for the MSMEs to comply.

“There are no separate legal regimes for taxation of MSMEs. Therefore, the tax regime and the tax environment have a model of one size fits all. Further, the tax laws impose on MSMEs the same compliance obligations including tax calculation, payment and filing just as the large entities,” he explained.

He said this was not helpful for the country and the MSMEs because all the countries the research studied had clear definitions for SMEs in their tax laws.

Nana Osei Bonsu pointed out that the success of the recommendations proposed in the study depended on the ability of the Ghana Revenue Authority (GRA) to reform its administrative system and embark on tax education and awareness creation in partnership with the business associations and other civil society groups.

“Issues about the segregation/categorisation of taxpayers are still outstanding and needs to be addressed to provide certainty for business planning and continuity. The scenario analysis provides good options for policy makers to choose from, considering their potential impact on tax revenue mobilisation.”

“The Private Enterprise Federation believes it is important for policy makers to consider a system which is in line with international best practice and also provides a good opportunity for the government to raise revenue as well as ease the compliance burden on businesses.”

On the basis of this report and prior engagements, the Federation is open for further discussions and engagement with policy makers on this subject,” he stated.

A further analysis conducted show that if this system is well implemented it will lead to reduced compliance burden and tax administration cost and increased voluntary compliance and tax revenues. In the medium to long term the analysis shows an over 100 percent tax revenue increase compared to current rates.

The report further reveals interesting dynamics about the MSME sector in the country. Other dignitaries present at the launch was the Chairman of the Parliamentary select committee on Trade; Hon. Nana Marfo, the GIMPA rector; Prof. Bondzi Simpson, the Chairman of the GIPC; Mr. Kwesi Abeasi, the GRA Achimota STO commissioner; Mr. Augustine Abankwa and the lead research consultant Dr. Isaac Nyame. A cross-section of dignitaries and awardees at the event

As part of the Strategic Partnership to Prevent and Fight Administrative Corruption in Ghana, (the “SPPACG Project”), PEF has introduced an award scheme known as the PEF Public Sector Service Delivery Award to serve as a recognition for public sector institutions reforming their operations for efficient and effective service delivery. The awards ceremony for this year only considered public sector organizations who PEF have been working with under the project so far.

The last two awards were the most prestigious for the night received by the Land Use and Spatial Planning Authority (LUSPA) and the Environmental Protection Agency (EPA) with a surprise award going to the StarGhana Foundation for their tremendous support to PEF and other like minded organizations over the years towards eradicating corruption in the country. Over all EPA won most awards, five in total, namely; the adoption of modern service delivery charter, the adoption of innovation in service delivery (including IT), best customer care unit, best business friendly and timely delivery of service to the private sector and the ultimate ‘best performing agency’ award. Followed by the Department for Factories Inspectorate (DFI) winning three in total in the following categories; adoption of modern service delivery charter, practical approaches to fight and prevent corruption and best corruption reporting mechanism.

The Land Use and Spatial Planning Authority (LUSPA) also won two awards including the prestigious Best Performing Agency award and the award for adoption of modern service delivery charter. Dr. Grace Bediako, the Director General for the National Development Planning Commission (NDPC) was the special guest of honor for the night. The participants were from government agencies, private sector associations and chambers, development partners, civil society organizations, members of the media and the diplomatic corps. The event was colorful, interspaced with traditional music and dance.

PEF ENGAGES PARLIAMENT AND OTHER EXPERTS ON TAX REFORMS FOR MSMEs As part of an ongoing research supported by the Open Society Initiative for West Africa (OSIWA), PEF met with the leadership of the Parliamentary select committee on Trade and the committee on Finance to present to them findings and recommendations from its research work on reforming the tax system in Ghana. During the period, PEF also met key agencies such as the Ghana Revenue Authority (GRA) and Civil Society Organizations to discuss the findings and recommendations to solicit their inputs to shape the final report.

This will ensure that businesses in different financial categories are made to pay taxes commensurate to their financial capabilities (ability to pay). Effectively this system is expected to make tax compliance more voluntary on the part of the MSMEs resulting in an expanded tax net which will inturn lower the cost of tax administration and boost government tax revenues. Eventually, it is the expectation that the private sector will become more tax compliant due to the introduction of better business-friendly provisions in the TIERED SYSTEM OF TAXATION taking into account the socio-economic realities of the business environment in Ghana thus creating a competitive thriving private sector which will boost government revenues to enable it execute its developmental agenda.

The next phase of the project will be to finalize and share the report with key stakeholders and policy makers in the country which will then launch us into full scale advocacy in print and electronic media. We believe this exercise will improve the ease of doing business in the country by creating an enabling environment for tax compliance and administration.